Earlier today some colleagues and I had a bit of a debate and discussion about foot washing. It was timely since tomorrow is Maundy Thursday and footwashing, a common occurence on this day, is often accompanied by some anxiety. The whens, hows, whys, why nots and various other permutations were bounced around and an alternative option of washing hands instead of feet was offered by some*. All of this led me to think about the text itself.

You can read John 13 here and here

First, I think this text is interesting because of what it says about Jesus (no great revelation here–we’re supposed to see what the text says about Jesus) and his identity at this late hour in his life. This isn’t early on in his ministry when he is gathering followers or perhaps when he was still formulating his ministry (as some say) but nearing the end. Nearing, in fact, the end of his life.

Vs 3 is of particular interest and I like the translation Net Bible gives here. “Because Jesus knew that the Father had handed all things over to him, and that he had come from God and was going back to God…”  The word “because” seems to convey not merely that he knew these particular things to be true but rather that the action which follows occurs as a result of knowing this truth. I’m no great Greek scholar but it seems that this fits the text quite well. Most significantly, however, it does NOT say ‘in spite of the fact that…’ Jesus does not do what he is about to do despite the reality that he had come from and was returning to God and that every thing had been placed into his hands but precisely because all this is true. Something inherent in his identity is what motivates his action in vs 4 and 5.

Much has been written about the whole washing of the feet ritual (or perhaps simple hygiene habit) in the ancient world so I will not waste too much time on this. Suffice to say feet are dirty and need to be washed by someone, be that either the owner of the feet or someone else. However, it does not seem to be a task people were getting in line to assist with. Additionally, there is a sense of subservience in the entire image given in the text. Jesus kneeling before his disciples and washing their feet. I don’t recall King David or Father Abraham or Moses or anyone other great leader in scripture washing the feet of those who had served and rightly ought to serve them. Pretty revolutionary.

While I do think that the dirtiness of the feet plays into the scene, I also think the fact that it was feet and not something else matters as well. Jesus didn’t simply kneel before them, he washed their feet. The feet part must matter as well because Peter makes this big deal over it; first how he doesn’t want Jesus washing his feet (appears to be a shame response) and then saying for Jesus to wash hands and face as well. What appears to be a shame response in Peter may be more than just the fact that his feet were dirty like everyone else in Jerusalem. I’ll grant that it is difficult and dangerous to try to discern a feeling from scripture when it isn’t specifically stated but I sincerely doubt that Peter’s negative and emphatic statement in vs 8 (‘you will never wash my feet forever’–literally. see the net bible translation link above) is only because he is concerned over the lack of cleanliness between his toes.

Feet are personal. I started to cite all the places I could find in cultures both modern and ancient where there were particular practices, ideas or rituals around feet that indicate the intimacy to which our feet are connected and they are just too numerous to bother with. Google it for yourself if you are curious. In an admittedly undocumented way, I’m willing to assert that feet are pretty much considered to be a very personal space for humans and the time and culture do not seem to be particularly relevent. (Obviously, I’m open to being shot down on this since I saw what appeared to be copious information and opted to just go with it, so if someone has evidence to the contrary, I’m sure willing to hear it.) Washing someone’s feet would be a really intimate and personal act and the closeness and personal-ness of the act does not seem to be limited to a particular time and place.

Feet are also quite symbolic in scripture. Moses must be bear footed on holy ground. Enemies fall at the feet when they are destroyed (one of my personal favorites is the song declaring the great deed of Jael in Judges 5:27.) Things are often trampled under foot to symbolize victory (Isaiah 26:5-6 where the high are brought down by God and trampled upon by the lowly as one example.) Feet are sometimes used euphemistically in the Old Testament to represent the genitals (Isaiah 6:2.)  In Matthew and Luke, Jesus tells the disciples that if a town rejects them because of him they are to shake the dust from their feet. In Luke he tells the disciples they have the power to tread with their feet on the symbolic agents of the devil (Luke 10.) Disciples sit at the feet of Jesus to learn. And last but certainly not least is the woman or women who, in emotionally raw and arguably unrivaled displays of love for Jesus, anoint his feet with costly perfume and cry on his feet, drying them with her hair. (John 12, Mark 14, Matthew 26, Luke 7.)

This does not even touch upon the phrases we use today such as ‘standing on your own two feet’ or the current trend in this country for frequent pedicures as an attempt to beautify something we consider to be less than attractive in their natural and unattended state, dirty and, you guessed it, personal. Oh, and I almost forgot…they are ticklish, too.

So what does it all MEAN??

Well, I’m sure that many more bright and scholarly than I can give a better answer. For me I’d say it has to do with Jesus working on removing our recurring sins and our need to work together in that very thing. In addition to all this foot business, washing almost always had to do with the removal of sin. If Jesus tells Peter that the rest of him is ‘clean’ and only his feet (private, personal, difficult to keep clean, intimate, etc etc) need to be washed and he’s doing that for him, it seems to indicate that Jesus cares about and tends to the parts that get dirty again and the parts we’d prefer he not meddle with. God loves and cares about, redeems and makes holy even our feet. The one who knows the number of hairs on our head also knows every step we have taken, every intimate, shameful, personal, uncomfortable and ticklish part of us and takes special care to tend to these places, too. (resisting the urge here to make a pun about soul and sole) It also says something about the nature of Jesus’ humility and our humility before one another. If the one who did this did so because of who he was, then this serving one another may indeed be inherent in our identity, too. 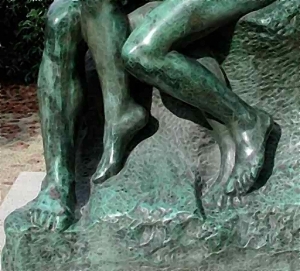 *With this scriptural and cultural context, it seems like a pretty significant act on Jesus’ part to wash the disciples’ feet. The suggestion has been made by some that a valid substitution might be to wash hands instead of feet or, perhaps, to have handwashing as an available alternative along side footwashing. While I greatly respect the intention here, I’m not sure it translates so well. This is the same intention that leads us to offer such things as nonalcoholic and non-allergy aggravating options for communion and other modifications that open up and make accessible worship experiences. Good and faithful intentions. However, I have to say that with not only the previously stated reasons but also Jesus’ words in the text itself (see vs 10 where Jesus states pretty emphatically that it’s the feet and not the hands or face), I am unconvinced that anything other than feet will suffice if we are striving to fulfill this act for one another.

2 thoughts on “Blessed are the Feet”