Hail, Sons and Daughters of the King! Let us rejoice this day, for today is Christ the King Sunday. It is the day when Christians all around the world celebrate and commemorate the one true king – the king of the universe.– Jesus the Christ, King of Kings, Lord of Lords, Son of God, Our Savior, Our Redeemer and the One through whom all things were made. We sing Crown Him with Many Crowns and are reminded of the splendor and majesty of a royal throne room. 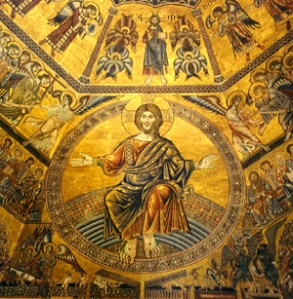 And yet, here today we find Jesus not in any throne room we’ve seen on television or in any movie. Not in robes of purple and red with bejeweled crown on a cushion ready to adorn his head, scepter ready for his hand. No, in today’s text on this Christ the King Sunday, we find him in the dusty streets of the Holy Land, walking and talking, leading and teaching a whole gang of fishermen, tax collectors and eating with people we wouldn’t open the door to greet. We find him not with royal scepter in hand making decrees and counting his money. We find him, instead, with ordinary people, teaching then about who he really is. Instead of handing out rewards to his loyal subjects for obedience to his majesty, he is showing his undeniable connection to the poorest and lowest of society.

This is our King.

It’s not the place you’d look for a king, but then again, nothing is ever quite what we expect with Jesus.

It is on this day each year we are called to see the starkness of a king on a cross; to see what a real king does to change the world, turn it upside down and inside out. We are invited to see our king as the one who is dying so that all of creation might live.

So who is this king? In our world of elected officials and government by the people, the notion of a king seems foreign to us. We may reject the image out of hand. After all, in no small way was our nation founded on ideas that rejected royal authority. However, unlike the human kings and queens we think of, this king is God.

While all of Jesus’ ministry teaches us about who our king truly is, today’s gospel reading gives us an interesting twist on things. Jesus is teaching the disciples, his inner 12 closest followers, those fishermen and a tax collector and perhaps a couple of other less than stellar people. This alone shows us that our king cares about what everyone thinks and believes. He is not concerned only with the scholars or the high ranking officials or the wealthy but with even the average person. This king’s wisdom is shared with all; we are all worthy of his teaching.

Jesus is teaching about what the reign of the Son of Man is like. What his kingdom is like. The interesting twist revealed in his story is what is truly valued by the king. It wasn’t someone paying taxes on time, being a law abiding citizen, accumulating wealth, or showing some profound loyalty to the ruling class. Quite the opposite. The king in his story tells one group of people “for I was hungry and you gave me food, I was thirsty and you gave me something to drink, I was a stranger and you welcomed me, I was naked and you gave me clothing, I was sick and you took care of me, I was in prison and you visited me.” Those with whom the king is not pleased are those who did not give food, drink, welcome, clothing, care, or companionship. Interestingly, both those who did and those who did not do these things are equally stunned. Both say, “When did we see you this way?”

Let’s stop and think about that for a moment. We often get wrapped up in the part of this text that talks about sheep going one way and goats going another and, while that may be important to think about, what is of greater importance, particularly because Jesus spends a great deal more time and uses more words on it, is the caring for those who lack and his direct alignment with them.

There is an interesting thing that happens to many people when they go on mission trips to the third world or to areas with significant struggles of poverty. We often think that we’re bringing Jesus to them, bringing Christian compassion and care, food, clothing, tools for shelter and all kinds of things. But most who go on these kinds of trips discover that is not the case. We may indeed be bringing things that are greatly needed and we are hopefully doing it in Jesus’ name and from his great storehouse of love he gives each of us. But we are not bringing them a Jesus they do not know. Our king, Jesus, has made it clear that he is already with them. He’ll meet us there and when we do meet those who are suffering by sharing our food, our clothing, by helping to build homes for those who have none, welcoming someone who is different from us, giving care and compassion to those who are ill and being a friend to those who are imprisoned by all manner of things, both by choices and not, we are meeting Jesus right there. We are meeting our king not in a grand throne room but in the least likely places in the world.

Our king’s life is very different from other kings and so is his death. Jesus’ coronation day is not a grand ceremony filled with pomp and circumstance, prestige and parties. His coronation day is when he is crowned not with jewels but with a wreath of thorns jammed onto his head; not by royal subjects but by those who are taunting him. His throne room is the hill of the skull and his throne is the cross.

A king’s throne is very important. It is, in a sense, the seat of power. Jesus’ throne is the cross. The seat of power for the king of the universe is the cross. A place of pain, loss, suffering, sacrifice and apparent defeat is a place of power? In fact, the place of the ultimate power? Yes, it is. Like we said, this is not the place you’d look for a king, but then again, nothing is ever quite what we expect with Jesus.

It is as Jesus hangs on the cross and faces death that his kingship is revealed to the world. Christ is King, not because of a crown or jewels or grand throne; not because of great power or because he saves himself but because of his self sacrificing love, his love that goes beyond fear, is willing to be weak in order to be the center of healing and life for all the universe, and restores and redeems the whole of creation and even us!

Jesus was not just a king in the history books for the people of a different time. He is king for us too. And much as it might be difficult for us to understand, Jesus isn’t just a king for people who follow the rules and live what we would judge to be a clean, upstanding life. He is king for the best of the best and for the worst of the worst and everyone in between. He isn’t just the king of all the people we like or all the ones who are acceptable in polite company. He is the king of everyone. That is good news after all, since, hard as we may try, we often do not fall into the “good” categories as we might wish we could.

Jesus isn’t just the king of the living. He is king of the living and the dead. He isn’t just a king of things on this side of the grave. His kingship goes beyond the grave. In fact, that is, in no small way, the very reason his throne was the cross in the first place. His life and his kingdom doesn’t end there. It does not stop where our gospel text for the day ends, it does not stop at the end of this entire gospel. Actually, it doesn’t end even on the last page of the bible. It continues from his earthly ministry to the cross to Easter morning when the tomb is empty and Jesus had been raised from the dead and is now at large in the world with each of us and waiting to meet us with those who are lost, broken, lonely, afraid and in great need. Our king is the one who by his death has destroyed death. There is no stopping this king because not even death itself could put an end to him. Jesus did not come to reign triumphant as a sovereign in the way the world is accustomed. In the way in which we’d expect. He came to triumphant over the grave and to give new life to all of creation.

As we celebrate Christ the King Sunday, we are not celebrating a king that reigns from some distant dimension or merely in the sweet by and by of heaven. Our King is here and now reigning in this world that we know and he has called us Sons and Daughters of the King in our Baptisms. At one of our worship services over the summer, we passed out nametags for everyone to wear that said Hello My Name Is Child Of God. Those nametags could also say Hello My Name Is Son or Daughter of the King. As part of the Body of Christ we are called to serve here in his kingdom in this place and to do so as he has served. We are called to love our neighbors and our enemies, to remember that each and every person we see is someone the King felt was worthy of his very life. To remember that those people who are in need are a place where the king makes his home.

Sometimes, it is difficult to look at the world around us and know that Jesus is the one who reigns. There is much in this world that looks like someone else altogether is in charge. But the same was true at Jesus’ crucifixion. His coronation sure looked like defeat, didn’t it? It is fairly certain that the only one dancing at Jesus’ coronation was the devil himself. But while evil rejoiced at what looked like the death of the so-called king, God turned the world upside down and inside out. God turned this humiliation into triumph. God turned this death into life. So when we look around at things that seem painful, wrong, unjust, when we feel lost, alone, afraid, when we feel that all those who need are too much for us, we can remember this moment—the coronation of our King—and know that every moment of our lives Jesus is working to transform them, too. Every moment, the King of Kings is working on turning thorns into crowns, turning death into life for us all.