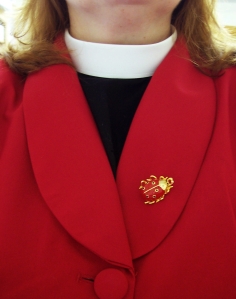 Originally, I had planned to post something about the recent election of the first woman as Bishop of the ELCA. I don’t know much about her, but I do know that I never thought I would see a woman elected as presiding bishop. Based on the number of times I’ve been rejected or told I would be great for such and such except for the “problem” that I am a woman, the undercurrent of anti-women in leadership I have experienced among some of my colleagues, and the sometimes bizarre experiences I’ve had as a female pastor*, I seriously doubted that a woman would ever get beyond a nomination for the presiding bishop role.

And yet, gladly, I was wrong.

Regardless of whatever I would have said in a full post on this topic, I could never really say it any better than this.

“There are still little girls in white, Sunday school shoes who will never hear a voice that is like theirs speak the Gospel, who will never see curves like the ones they will have under the robes of the one raising bread and wine behind an altar and speaking ancient, holy words of promise and forgiveness, who will never know without reservation that she is made in the image of God in all her glorious girl-ness. But today, today we are closer. And this makes me want to put on white sandals and dance in all my glorious girl-ness… in my clergy shirt.” —Nadia Bolz-Weber

*Everyone’s experience is not the same as mine, so I am quite aware that not every woman in the ELCA nor every female pastor has had the same experience as me. Additionally, I don’t want to make it seem as though all of my denomination is unsupportive of women in ministry because, quite obviously they are supportive!