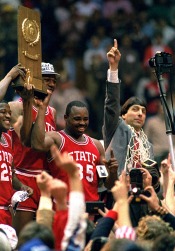 Recently, people all across the country have been fascinated by pieces of paper with complex systems of lines on them like some sort of strange tree’s root system. Many have shouted at televisions, hung their heads in despair, or pumped their fists in the air with triumph. It is March Madness; men’s and women’s college basketball tournament. Early upsets and upheaval, surprise victories and unheard of defeats have made this an interesting season and, if you are or know a college basketball fan, then you know exactly what I’m talking about. If you are not a fan and do not know any, then don’t worry. I’m not about to use a lot of sports metaphors. They don’t usually make a lot of sense to me either. Except for basketball or hockey which, of course, make perfect sense.

I remember the 1983 tournaments where a little team from NC State that no one dreamed would ever make it to the sweet sixteen, much less the finals, ended up defeating everyone and bringing home the championship. Along the way, they defeated (the then college player) Michael Jordan. The NC State Wolfpack was called a Cinderella team.

We love that kind of story, don’t we! The underdog sports team that surprises everyone by bringing home the championship. The Jamaican Bobsled Team competing well in the Winter Olympics despite ridicule and overwhelming odds. The last person you would ever think of showing up to save the day. The common girl who becomes a princess. The home town kid that no one thought would amount to much becoming a decorated war hero. The child with zero opportunity, advantage, or reason to believe in themselves becoming a physician, artist, musician, political leader. 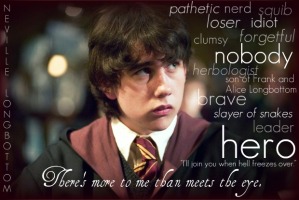 I think God likes these kinds of stories, too.

Our text from our Old Testament lesson is one good example. Nothing in that story went as expected.

This story actually begins many years prior to this, way back before Samuel is born when his mother, Hannah, prayed for a child. She had not been able to have children, even though her husband’s other wife seemed to be having one after another! She went to the temple and prayed and prayed and finally God gave her Samuel. He was definitely a special child and when he was old enough, his mother took him to the temple to live there permanently. Scripture tells us that he grew up in the presence of the Lord.

Around the same time, the people of Israel were praying and praying for God to give them a King. Up until that time, they had what were called Judges. These were wise people who acted sort of like tribal chieftains. They helped make decisions and had the final word in a dispute to determine what was right and what was wrong. But all the other peoples in the area where the Israelites lived had kings and other royal rulers to guide them. They wanted a king, too. They wanted a mighty, powerful king who could be a great ruler like all the other people had.

And, finally, God answered their prayer. God chose a king for them and his name was Saul. He was an impressive and mighty king; powerful enough to win many battles and even to unite all of the tribes of Israel for the first time. There was every reason to believe Saul was going to be a great king. He had all the qualifications one would expect were needed to make a great king. He’s just the one you’d pick out of the crowd as King-Like. For quite a while, he was a great king.

Eventually, the time came for God to select a new king because Saul had decided he wanted to worship other gods in addition to God. He refused to return to worshiping only the God of Israel, even though it was God who had made him king in the first place. Samuel, who was now a grown man and was a respected priest and wise prophet, was sent by God to the home of Jesse to find a new king.

When Samuel arrived in Bethlehem, the town where Jesse and his family lived, he planned and prepared a great celebration worship. He invited Jesse and all of his sons to the service. All of the sons came before Samuel one at a time.

First, there was Eliab. Samuel thought: surely, this must be the guy God is looking for to make the next king. He’s the first born, after all, and that’s usually the best pick! His name means My God is Father. He even looked the part! But God said, no this is not the guy.

God tells Samuel: I do not make decisions based on outward appearances because I do not see the way people see. I look at the real person, the heart, the person on the inside. So, God did not choose Eliab. Then Jesse’s second son, Abinadab, came before Samuel. Maybe this one was right. His name means My Father is Noble. Great choice for a king! Once again, God said: this is not the guy. Then the third, fourth and fifth. All had noble sounding names, looked strong and mighty like a king. Each time, God said they weren’t the right one. Then sixth and seventh. Still no. Jesse was running out of sons!

Finally, Samuel turns to Jesse and asks: are all of your sons here? Have you left any out? Samuel was sure God wanted one of the sons of Jesse to be king but none of these were the right one.

Well, Jesse tells him, there is still the youngest. But surely, you wouldn’t be interested in seeing him! He’s just a kid! He’s out in the pasture somewhere keeping the sheep.

Well, Samuel said, I want to see him, too. We can almost imagine Jesse sort of shaking his head in disbelief. Even if he didn’t know what the great prophet Samuel was looking for, there would be no way in the world he would find it in the youngest son! He was not tall and strong. He was not brave and mighty. He was too young to have done much of anything in his life but keep the sheep! None of that makes a king!

But Samuel insists. He even says no one will sit down to eat until he meets the last of Jesse’s sons. So, the youngest is sent for. And David comes before Samuel. David, whose name means Beloved. Not Mighty one of God, or Astonishing, or Noble One. Beloved. He was tanned and outdoorsy looking, like you might expect a young shepherd to look. He was handsome enough but not what you’d think of as a king.

God tells Samuel: this is the one. Take the oil you have brought with you and anoint him because he is to be the king of Israel. Samuel, right then and there, pours oil on the head of David and the spirit of God was with him from then on.

The story does not end here. There is quite some time between this night, when the anointing oil pours from the horn of Samuel over the head of David, through his hair, down his face and onto his shoulders and chest, and the time when David will actually be recognized as the King. The spirit of God is with David, but Saul’s time on the throne is not yet complete.

There will come a day for David when, even though he has never been in any kind of battle before, will go out to fight for Israel and will bravely walk onto the battle field to stand against a great Philistine warrior. He will stand before Goliath without a single piece of armor on his body because he is too small for the armor given to him. Goliath, before being brought down not by a spear or sword or arrow but by David’s smooth river stones, will look upon this little boy as no threat to him because he is too young and too pretty to be a real threat. That is, of course, until he is flat on his back and David is standing over him in victory.

There will be many times in David’s life when he will make poor choices, make mistakes, when he will do things he ought not do just like all of us. And yet God will not leave him. David is the right choice forking not because he is perfect but because he loves God. David is the right choice for king because this is the job God has called him to do; this is who God has called him to be.

We do not know what happened to Jesse’s other sons. My guess is that God had other plans for them and their lives that were just as important as being a good king even if they weren’t the kinds of things recorded in history books.

God chooses whomever God wishes for whatever God’s purpose is, not the one we think should be chosen. God gives calls and purposes to people based on what God knows not upon what we see or think we know.

God’s love for the underdog does not end with David. Countless times God chooses the lowly, the poor, the least, the runt of the litter, the meek, and the broken to save the day. Scripture is chock full of losers, last picked, ordinary, unexpected and anti-heroes. Most significantly, God did not choose a wealthy family for his only Son but an economically challenged carpenter’s family. He did not choose mighty Jerusalem to be the city of his birth, but the tiny little insignificant town of Bethlehem, the same home town of little David. He did not choose a great queen to give birth to his Son, but a very young girl from an average family.

His son, Jesus, did not choose the greatest and smartest top of the class students to be his disciples, but a whole gang of underdogs. He did not choose from the social elite men of the temple with significant connections but fishermen, a tax collector and even some women with no political or social power at all. He chose the sinners, the poor, the beggars, the sick, the lost and broken and he did so over and over again. God did not choose a grand and opulent throne room for his son’s coronation. No, his son, the King of all creation, took a cross as his throne and willing, self-sacrificing death as his coronation. And then… well… there is no more unexpected a hero, no greater an underdog than a man who has died. Who thought anyone could come back from that for the win?

God does not, even now, choose perfect people to be the people of God. Thank goodness! He does not wait for only the pure and perfect ones to do the work of God. God does not even wait until we make ourselves perfect and holy enough before calling each and every one of us to something: to be leaders, parents, teachers, learners, creators, listeners, companions, friends, defenders, heroes both big and small. God chooses us to be his Davids; his ‘beloved’s. God chooses us, imperfect and unexpected as we are, to be his.

One thought on “Unexpected Heroes”