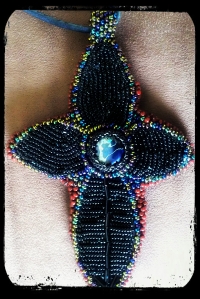 In the beginning, everything was perfect. Adam walked with God in the cool of the evening. There were no obstacles, no barriers, and no misunderstandings. Life was so good living in the presence of God that it was a Garden of Eden. But then….things changed. Adam, Eve….we humans….listened to what sounded like such logic from the tempter.

You will not surely die if you eat from that tree!

And crashing through the bite of the fruit, over the teeth, down the throat, sin poured into our bodies…into our lives…into the whole earth. God, though broken hearted, in his wisdom removed us from the garden and placed the flaming sword between us and the tree of life. How horrible it would be to have to live forever in this brokenness! Life wasn’t a Garden of Eden without God. In the sweat of his brow Adam worked, just to have daily bread.

But God was still there.

Broken hearted, God sought to repair the rift between him and his most precious creation and to restore all that he had made. A covenant he made with Abraham. We would be his people and he would be our God. But faithfulness seemed beyond us and away we strayed down some winding path time after time. The people of God ended up so far from the Garden as to be in slavery in Egypt. But God, broken hearted for the suffering of his people, raised up a leader, Moses, to lead them from this slavery to freedom so that they could worship him again.

So that we could be with God again.

God made a covenant with Moses and the people. He gave them guides so they could know God. He said, I am the Lord Your God who freed you from a slave’s house. You have no other God for I will be your God and you will be my people. And the people said, Hear, O Israel! The Lord is our God, the Lord Alone!

But the people did not remain faithful. They forgot that they belonged to God and that God belonged to them. But God, broken hearted, did not relent and did not give up on us. He raised up a great king to lead the people. David, a man after his own heart! He was mighty and brave and strong. He killed a great enemy with a single stone and led the people to greatness. They called him Messiah, which means the ‘anointed one of God.’ These were God’s people and the Lord was their God.

But the people did not remain faithful. Time after time, broken hearted, God sent prophets to his people to try to explain and re-explain who God was, what God wanted, to remind them of the time when there were no obstacles, no barriers and no misunderstandings between us and God and it was like living in the Garden of Eden. Time and again, the people would return to God with all their heart, the source grace and mercy. And time and again, the people would turn away from God and leave him broken hearted, to embrace his world in sin that turned against him.

The prophet Isaiah called out to us to remember God. The Lord says for us not to fear, for he has redeemed us! The Lord is our God. And he spoke of the suffering servant of God who was wounded for our sins, who took upon himself the punishment we were due and by the pain he suffered we would be healed and made whole with God. But the people may not have realized what he meant. Isaiah himself may not have realized what his words meant because the people all looked for the Messiah to be like David—the great man, the mighty man, the strong man. The man after God’s own heart.

The biblical scholar, NT Wright wrote this poem about Jesus: “David, where are you? Off to meet the giant With four smooth nails I’ve taken from the wine-press. Adam, where are you? Here, outside the gate, The wrong side of the whirling, flaming sword; Loving you, golden Jerusalem, through obedient eyes, That in the blood of my brow you may eat bread.”

Broken hearted, God came to us. There was no other way. He’d known all along that it might come to this. Upon his own back he took our sins. The flesh he had taken up in order to be with us—it was upon this flesh he heaped up our suffering and pain and disease. If we would not remain with him, he would come to us and remain with us. He would pour out himself to death so that we would not live forever with sin but instead, live forever with him.

Behold! The broken heart of God, nailed to the cross.