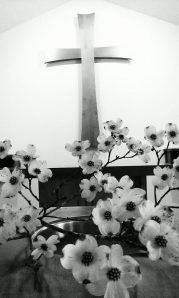 Brothers and sisters in Christ, welcome to the resurrection! There is no greater joy in all the world than to proclaim this truth—the truth that is above all else—the truth that reigns above all in all creation. Christ is risen! He is risen indeed! Halleluia! Halleluia!

The joy we share this day in this good news has not come easily nor without a long and often dark journey. Mere days ago we gathered here to remember the night in which our Lord was betrayed and handed over to death. The night in which he, the king of the universe, washed the feet of his followers. The night in which he gave a new commandment to love one another as he has loved us. And then we stripped the entire worship space of all adornment and decoration, leaving it starkly bare for the next day. Then, there was Good Friday: that day which is Good not because of us, not because of any good we will ever do but because while we are all, every last one of us, utterly unable to save ourselves, Jesus was about the terrible and awesome business of saving not just you, not just me, but everyone and all of creation. Then the Vigil of Easter where we struck the new fire, lit the new paschal candle, recalled the history of God’s people from creation to this very day as we waited for God to resurrect Jesus.

You see, this story of Jesus’ death and resurrection is not about some guy who faced adversity and worked really hard and made a great recovery. The tomb and the grave are no mere obstacles to overcome. For make no mistake, death is our enemy and this was no mock battle with a savior who was merely asleep. He did not pretend to face an enemy that we must face. He died as we all die. Real flesh and blood death just like us.

But God would not leave it that way. He would not leave his son in the tomb. And he does not leave us either. For early in the morning on the first day of the week, the women, with broken hearts, headed for the tomb of Jesus; the one they had thought would be the Messiah, the king, the mighty man of God. But when they arrive at a place of death, they instead found a proclamation of life.

An angel of the Lord came down from heaven and rolled back the stone from the tomb and sat down upon it. Do not be afraid, the angel tells the women at the tomb, I know that you are looking for Jesus who was crucified. He is not here; for he has been raised. Why do you look for the living among the dead? He is not here but has risen!

Jesus was not merely a mighty man of God but God himself, God who wrapped himself in our flesh and blood, filled himself with our hearts, our very lives, and took upon his own shoulders all the broken sinfulness of the world, climbed up on the cross, opened wide his arms to hold us all, and dove into the last and greatest battle with death itself. He was not in the tomb when the women went that morning because death had been defeated. He had died, just like we all will, so that when he rose, he could bring us all with him. He died to be united with us so that we are united with him in his resurrection.

A friend of mine once said, “Without this week, there would be No Other Day for the Church.” This Holy Week, these Holy Days, this holy death on the cross and, more than anything else, this new life coming out of the tomb, walking from the land of the dead to the land of the living, gives meaning to all the rest.

We don’t really celebrate Easter as we do some other holidays like, for example, Christmas. No one goes around singing, ‘it’s beginning to look a lot like Easter!’ Houses are not festooned with evergreens and lighted candles. There are not wrapped packages to shake and people do not going door to door caroling ‘Ah Holy Jesus’ or “Go To Dark Gethsemane”. No Salvation Army bucket and bell outside Walmart.

The church is many things. There are probably as many ways to understand church as there are people here now. It is a family, a place of peace, a place of reconciliation and grace. It is an organization that helps those in need, a building for worship. It is a place of learning and growing, a place of comfort like no other. Yet there is one thing that feeds all of those things, one truth that makes all of it, and so much more, actually mean something. It is the truth that on the tree of the cross, God gave salvation to all, that where death began, there life might be restored. The truth that early in the morning on the first day of the week, when the truly flesh and blood body of Jesus ought to have been in his tomb going the way of all living things, to decay and pass away, he was instead alive and at large in the world. The truth that this is the day in which we proclaim the most joyful news of all—the truth that is above all else—the truth that reigns above all in all creation. Christ is risen! He is risen indeed! Halleluia! Halleluia!