I must begin this sermon with a confession about how difficult it has been to decide what to talk about this morning. Actually, it would be more accurate to say it has been difficult to find good words at all. Our collective national hearts seem to keep breaking over and over. From the outrage over a rapist’s trifling and laughable sentence and laws that make our common human bodily need to eliminate waste and where to do it a primary topic of conversation, to the cruel, almost overwhelming news of the largest mass shooting in our nation’s history and the one-year anniversary of the murder of nine African American Charlestonian Christians in their own church by a young white man in an attempt to start a race war. And beneath all of this lays the boiling political climate and continuing financial struggle so many face every single day to make ends meet and survive to the next paycheck.

Under the weight of such things it is hard to breath, let alone speak, and speaking words of any meaning seems impossible. Violence against women’s bodies, anger and furry within and in response to bigotry and racism, every possible way in which lines can be drawn to make every issue, every event, seemingly every moment of our lives into US vs THEM.

How much easier it would all be if we could spot the THEM! All people who have a certain color of hair or eyes, all people who are a certain shape or speak a certain way—all of THEM are evil. Then we could separate THEM from US, perhaps even kill all of THEM so we could be safe. But the truth is that the line between good and evil runs through the center of every human heart. There is no THEM, there is only US.

Last Sunday, I stood in the pulpit and preached about how God loves the Big Bad Wolf, too. We have a tendency to think that God loves us when we are good and, therefore, must hate people who are bad and do bad things. After I got home and began to read the details of the shooting in Orlando, I did not want to believe that God loves the Big Bad Wolves who prey upon the vulnerable. Yet even so, it is most certainly true. While we were sinners, Christ died for us. While we were enemies of God, we were reconciled to God through the death of his Son. (Romans 5:8-10)

I want to say something about all of this, but what? I want to speak to all of this and even more that weighs down our hearts so heavily. But I do not have wise or clever words for these kinds of events. I do not have things to say that can translate into internet memes and marvelous phrases that can be shared and reshared on Facebook and Twitter so as to bring a sense of solidarity or comfort. I do not know what to do to help or to make it better.

Our struggles are Legion.

And then…..just like that, God provides a way. Not an answer to every one of the whys and hows that we have in our hearts, but a way through this wilderness. With God.

Legion is in our Gospel text for today.

Jesus steps out of his boat along with his disciples onto the shore and right away there is someone flinging themselves on the ground before him. Last week we heard the story of the woman of bad reputation crying all over Jesus’ feet and anointing them with oil, showing her great love for Jesus and then his declaration that she may go in peace. Today’s story is another outcast and unwanted person at his feet but this time it is a man of the city who is possessed by demons and is not showering him with love but thrashing in agony. This man doesn’t even live in a house. Although the people of the community often keep him guarded and chained to try to prevent the damage he can do when he is taken over by the demon, when he is in the throws of struggle nothing can hold him. In the past he has broken those chains and run off into the wild lands and it seems that most of the time he lives among the dead in the cemetery. Alone.

And yet not, in the worst possible way, alone at all.

He flings himself down on the ground before Jesus and shouts at the top of his voice “what have you to do with me, Jesus, Son of the Most High God? I beg you not to torment me,” he pleads. “What is your name?” Jesus asks him. “Legion” he replies.

Legion. There are so many demons in this poor man that they are legion; vast in number, a great multitude.

Perhaps this is a point of connection for us as we struggle with difficulties in our lives. Rarely are our problems just one thing. Sometimes we try to oversimplify things and find a single culprit to point to and say: this is why we suffer. It is poor parenting that causes anti social children who have little to no empathy for others. That is the cause of our suffering. No, it is foreign terrorists attacking us, recruiting our citizens, plotting against us to bring us down. No, it is this or that political or financial or social or physical issue that is at the root of all our problems!

No, our problems are Legion. By that I do not mean that our struggles come from a demonic force outside ourselves so much as our struggles are vast in number, coming from many directions, all consuming, destructive, divisive, and keeping us far away from healthy, hopeful, loving communities and, instead, wandering in the wilderness and wasteland of hopelessness and feeling desperately alone.

The demons Legion, within the body of the man thrown down on the ground before Jesus, ask to be allowed to enter into a heard of pigs, which Jesus permits them to do. Then the pigs run off into the sea and drown, a further image of the final chaotic end to which such evil, destructive forces wish to drag all life.

The man, finally free from his demons, sits at the feet of Jesus. Calm, self-possessed and wearing clothing. The wild man who had been flung down upon the ground before him, the one who had to be kept away from others so he would not hurt them, who lived in the wilderness among the tombs, was now sitting as a student would sit at Jesus’ feet. He was set free from the controlling grip of Legion. Or as the scripture literally says, he is healed.

In spite of this miraculous healing, the people of the area are possessed by fear and ask Jesus to leave. They want no part of whatever this is and they want no part of this man Jesus. As he is leaving, the healed man begs to go along but Jesus sends him home. “Declare how much God has done for you,” Jesus instructs him. He goes and tells everyone what Jesus did for him.

One of the things that has come to my mind several times this week is something that was said a few months ago at the gathering of Appalachian helping organizations we had here at our church. Much pain and suffering was spoken that day. The sufferings of so many in our area, the pains we inflict upon others and ourselves, were spoken of and the possibilities to end this suffering seemed feeble and limited. I found myself wondering what on earth one little Lutheran church could do to help. One of the participants said, “if there is one thing that churches could do, it would be to teach us how to treat one another better. It would address virtually every one of the problems we’ve discussed.”

And then…. just like that, God has made a way. It looks like a small and not very important way, but it may be the most important of all.

When the man who had been healed of the demons wanted to follow Jesus, he told him to tell others what God had done for him. He did not instruct him on how to cast out other people’s demons or how to go to war against all the evils of the world. That is Jesus’ job. Instead, he told him to share his experience with others.

He also, for the sake of clarity here, did not say to go beat people with scripture, shame and guilt them into certain behaviors, force them to believe as you do, assume you have the ability to judge the righteousness of others, and hate people who are different from you or that have the same problems you used to have. Jesus told him to declare how much God has done for him; to share his experience with others. 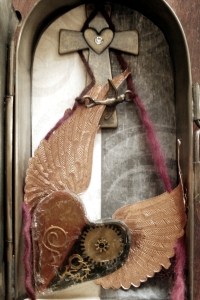 What has God done for us? We, who have made mistakes in thought, word, and deed, done the wrong things and neglected to do the right things even with the very best of intentions, not loved our neighbors as ourselves and not loved God with our whole heart have been, and continue to be over and over again, forgiven and healed and loved by God. While we were enemies of God, we were loved so much that God made any and every sacrifice for us, to bring us closer to God. And we have been called, and continue to be called no matter what, to the table of God to be fed and nourished in the purest form of love over and over and over again.

Mother Theresa said, “Not all of us can do great things but we can do small things with great love.” We cannot fix the Legion of struggles we have, cast out the multitude of ways in which we and all the world are broken. We require and receive divine help in healing the world. But we can declare how much God has done for us. We can declare, enact and teach love.

It seems like such small things: acts of compassion and kindness, practicing empathy and generosity, experiencing and giving mercy and grace. And yet these small things are filled with God’s great love which is far more powerful than a legion of demons.

In the end, those are the only words I can find to speak to the struggles we face today or any day of our lives, be they big or small. So let us love God with all our hearts, love our neighbors as ourselves, and love our enemies. Beloved, let us love one another, for love is from God.