The Jesus You Can’t Ignore: What You Must Learn From the Bold Confrontations of Christ by John MacArthur. 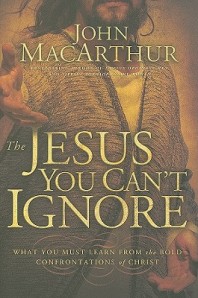 I began reading this book with the impression from the cover art and, frankly, my experience with things titled similarly, that this was going to be one of those books aimed at the kind of sappy, individualistic, private relationship with God books that I do not like. I was completely wrong.

In this book, MacArthur writes about the less fluffy aspects of Jesus’ earthly ministry, specifically his confrontations with the religious elite of first century Judaism. He systematically draws out scene after scene of Jesus’ direct and assertive dealings with, most often, the Pharisees and, by so doing, gives an example to current day Christians of the need to be fearless when defending the faith and the evidence for steering clear of being “nice” just so everyone can get along. I found this endorsement of passionate debate to be a valid stance particularly in light of the resistance of many to take a stand on anything for fear of offending someone. People can fight like cats and dogs and argue like screaming banshees on reality tv and everyone loves it, but it is not acceptable to speak passionately about something in which one believes or the God of our faith. MacArthur is an interesting writer and his prose is dynamic and captures the reader’s interest on nearly every page. He also makes information accessible and intriguing.

Although I agree very much with MacArthur’s overall point, I am uncertain about some of his approach. The book seems to be a polemic against the relatively recent “Evangelical Manifest“, something about which I know very little. However, he is quite obviously upset about this “manifesto” and takes the time in ever section of every chapter to mention that the actions of Jesus he just described would not be acceptable to those who think along the lines of this particular document.

In addition to some points on which he and I will never agree (such as the value of the creeds, his patronization of Orthodox, Roman Catholics and most Protestants, his hearty condemnation of academia, and his insistence that Jesus’ words about his body as real food being symbolic) I found his writing to be too acerbic and too narrow to justly portray the full character of Jesus. I could write at length about his frequent conjecture and sometimes flat out embellishments to the thoughts and motives of people in scripture, including Jesus, in sections where the scripture is entirely ambiguous or silent altogether. His characterization of the Pharisees is so extreme and distorted as to fall to pieces under the weight of such evil piled upon it. There is scarcely an evil quality that could be applied to a villain that is omitted from the description of the Pharisees. He dances dangerously close to anti-Semitism and, I think, may actually cross the line on a few occasions. He absolutely insists that Jesus’ purpose in his earthly ministry is to attack and tear down the Pharisaic belief system and to attack “THEIR” belief and “THEIR” laws and “THEIR” faith, as if Jesus himself were not a Jewish Rabbi.  According to MacArthur, the entire Sermon on the Mount was nothing at all but a long polemic against them. Jesus’ healings and miracles were not, apparently, signs of the in breaking of the kingdom nor of his battle against the forces of evil and the devil. Instead, they were ways in which he was trying to provoke the Pharisees. Omitted entirely, as far as I could tell, were any of Jesus’ bold confrontations of evil in the form of demon possessions, resisting of the temptation of the devil in the garden and the cross itself which is, unsurpassable, the boldest confrontation of evil ever seen in all of history.

While his overall purpose for the book rings true for me, I take issue with many aspects of the text itself and recommend that a reader approach the book with a critical eye.

Disclosure of Material Connection: I received this book free from Thomas Nelson Publishers as part of their BookSneeze.com <http://BookSneeze.com> book review bloggers program. I was not required to write a positive review. The opinions I have expressed are my own. I am disclosing this in accordance with the Federal Trade Commission’s 16 CFR, Part 255

One thought on “Book Review: The Jesus You Can’t Ignore by John MacArthur”