O Key of David and scepter of the House of Israel; you open and no one can shut; you shut and no one can open: Come and lead the prisoners from the prison house, those who dwell in darkness and the shadow of death.

Several years ago, right smack in the middle of my seminary career, I was elected to be the school’s Student Body President. Since I was never a popular kid in school and often spent a lot of time, energy, and tears on trying to “fit in”, this was a particularly big deal to me! A classmate of mine humorously came to my apartment, fell to his knees and said “all hail the queen!” I called my mom to tell her about all of this. “So I am the queen!” I laughed. “Oh Yeah,” she said, “You’re the queen alright; the Queen of the Island of Misfit Toys!”

She always wanted to be sure I didn’t get “too big for my britches”! But there was something else here, too. That’s a story many of you have heard me tell in the past and it has shaped a lot of how I view the purpose of the church and the mission of our God, who opens doors and leads prisoners out of darkness into light.

The Island of Misfit Toys is a fictional island in the story of Rudolph, The Red Nosed Reindeer.  In fact, the island is a central theme of the entire story. Rudolph is a misfit because of his red nose. His friend Hermey, the elf who wants to be a dentist instead of a toymaker, is also a misfit. Rudolph’s father tries to help him fit in with the other reindeer by covering his embarrassing bright red nose with mud. The big boss elf tries to both beg and bully Hermey into giving up the crazy idea of dentistry and just be a normal elf that makes toys.

After Rudolph is laughed at, called names, and excluded by both young deer and adults alike, he meets up with the equally outcast Hermey. They sing a song asking “why am I such a misfit?” and “why don’t I fit in?” They decide to run away.

Fitting in. It’s that thing we all want. At some point or another, we have all felt like we don’t fit in. It is a natural and healthy human need to have a place where we belong, a group with which we identify, a family, a culture, a circle of companions. When we don’t have a place where we belong, we start trying for the cheaper version: to “fit in”. Belonging means I am meant to be here, these are my people and I am good enough just as I am, I am loved and accepted here. Fitting in means I am willing to be whoever you need me to be so you will not cast me out, hurt me or shame me. Fitting in isn’t belonging, it is being stuck in a prison.

Sometimes, we may think we’ve moved beyond this need when we get to a certain age. Perhaps the sharp edges of fitting in we all feel in adolescence are dulled in adulthood, but the need to belong is normal and healthy and the striving to fit in when we don’t feel like we belong are about being broken human beings not about a certain age or maturity. Wanting to fit in underlies gossip, our criticism and judgment of others, jealousy and envy. It is a significant factor in how companies market to all age and economic groups. It impacts how we eat, how open we are about ourselves, our spending, alcohol consumption, and countless other things we do, say, want, and need. That prayer at the beginning, about the One who comes to lead the prisoners from the prison house: that is Christ. O Key of David, Jesus Christ, is the one who has the key to the lock of our prisons. One of our many prisons is this very desperate need to fit in.

Our two misfits, Rudolph and Hermey, have some adventures in their running away from home including meeting and running away from the Abominable Snowman. One significant stop in their journey is on the Island of Misfit Toys. This is the place where all the “unwanted” toys go. A Jack in the box named Charlie, a water gun that squirts jelly, a bird that swims instead of flies, a doll with depression and abandonment issues, a cowboy ridding an ostrich, and an elephant with polkadots, just to name a few. These are the toys it is believed no one wants because they are misfits. They have something about them that isn’t “normal” or makes them look or act differently, like a reindeer with a red LED bulb for a nose or an elf with a toothbrush.

The misfit toys are brought to the island by the King, a flying Lion named Moonracer. Every night King Moonracer flies around the world looking for misfit toys, the outcasts, the unwanted, the different, the ones that don’t belong, and brings them to the island. On the island, it doesn’t matter that they are misfits because they belong. 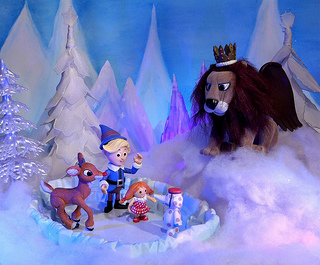 The truth is that in a way, the church is the Island of Misfit Toys. Jesus, the King of our Island, is searching all night (and day, too) for those who are lost, lonely, broken and afraid. And that’s all of us. And all of the rest of the world, too. It’s here that we don’t have to try to “fit in”, to do and be whatever and whoever everyone else wants us to be in order to not be cast out, hurt, or shamed. It is here, in the church, where we belong; the place where we are meant to be, where we are worthy of love simply because we are each a child of God. The church is the Island of Misfit Toys, where all are welcome and all belong.

Ultimately, for all of those little misfit toys to really belong, they need something more than finding a way to “fit in” with other toys. They don’t need to be “fixed” or have their “flaws” disguised. They need to “belong” in a home to a child. King Moonracer asks the little band of runaway misfits to please ask Santa to find homes for these toys.

Of course, when Rudolph and Hermey return home everyone’s misfit characteristics are finally seen by others to be valuable. Hermey’s dentistry skills help him to pull the teeth of the Abominable Snowman so he’s no longer dangerous and can help decorate the tallest trees, proving that while neither of them fit in, they belong in Christmas Town. Rudolph discovers he belongs and goes down in history for his red nose guiding Santa’s sleigh and all the misfit toys are given homes where they can belong.

And that’s the thing about belonging on the Island, belong in the church. Ultimately, the church sends us out into the world again, but this time with the knowledge that we do belong. We don’t have to fit in because we belong to God and the people of God. The Holy Spirit can use those things that make us misfits to do a great deal of good in the world. Noah, Moses, Deborah, John the Baptist, Paul, Martin Luther, Beethoven, Joan of Arc, Amelia Earhart, Albert Einstein, Rosa Parks, Abraham Lincoln, Juliet Gordon Lowe, Simone Weil, Florence Nightingale, and Leonardo Da Vinci were all misfits. And those were just the ones I could think of off the top of my head. I think it is also fair to say that Jesus Christ certainly did not “fit in” with either those looking for a military leader messiah or a nice, quiet Jewish rabbi who didn’t cause trouble.

3 thoughts on “The Island of Misfit Toys”