This lent I invite us to ponder something that we all desperately need but are rarely willing to give; something that we benefit from receiving but perhaps benefit even more from giving. To withhold it from others can make us sick, physically, emotionally and spiritually, and in giving it, we are set free.

Forgiveness: 1. to grant pardon for an offense 2. to give up all claim on account of; remit a debt 3. to grant pardon 4. to cease to feel resentment against 5. to cancel an indebtedness or liability

Forgiveness is one of those things we hear a great deal about in scripture and in worship. It certainly is important and it is something we all need because we are all, as Luther said, simultaneously saint and sinner. Even on our best days, we make mistakes. Most of all we need forgiveness from God. And we, through God’s mercy and grace, receive it. Each week we hear declared the gracious gift of God’s forgiveness in worship: “…the entire forgiveness of all of your sins in the name of the Father and the Son and the Holy Spirit.” Amen!

During this Lenten season we are going to study and ponder forgiveness. And hopefully, with the power of the Holy Spirit, we may actually do some forgiving as well.

Of all the things I get to do as a pastor, this humbling privilege to be merely the one who announces this truth of forgiveness has moved me to tears many times. How great a gift this is! We are freed from the crippling burden of our flaws and mistakes by the forgiveness of God!

It seems it is not. There are many places in the bible we can find an unmistakable connection between God’s forgiveness of us and ours of each other. Not the least of which is the Lord’s prayer: forgive us our sins/debts/trespasses as we forgive the same of others.

So what actually IS forgiveness? Well, the dictionary definition is what I read at the beginning. A researcher in the field of forgiveness has defined it like this: “….when people forgive, they essentially give up the anger to which they are entitled and give to their offender a gift to which he or she is not entitled.”—Enright. In other words, forgiveness is mercy and grace.

To forgive is to do the same thing that God does (on a grander scale of course) when we are forgiven. We are very close to God when we forgive.

But forgiveness can also be easily misunderstood and twisted into something it is not so it is a good idea to look, in a practical way, at what we are called to do when we forgive.

Forgiveness is not an endorsement of anything. In the Gospel of Luke, at the moment of his death on the cross, Jesus extends gracious forgiveness to the man next to him. “You will be with me in paradise.” Does this mean that Jesus had decided that whatever the crimes the man had committed were ok or actually good things to do? Did Jesus’ forgiveness mean that it was ok to steal or murder or whatever it was the man had done to earn himself a death penalty? Of course not. Jesus’ forgiveness of this man was not an endorsement of his actions but a declaration of God’s mercy as more powerful than anything that man could have done.

When we forgive, we are also not saying that whatever happened was ok or good. Forgiveness is not a stamp of approval of wrongdoing. For us to forgive is no more an endorsement of what was done than Jesus forgiveness of the criminal on the cross beside him was an ok to go commit crimes.

Forgiveness is not a feeling. I realize this sounds strange to us because when we think about forgiving someone we are dwelling on our feelings. We are hurt, we are angry, we are indignant, we are sad. We may have other feelings, too. Because we are focusing on our feelings, being told to forgive can make us feel those emotions even more intensely. We sometimes say something like “I don’t feel like forgiving” or “I don’t feel forgiving of them.” But that really means I am still feeling hurt, angry, sad, disappointed. We do not actually “feel forgiving” and then forgive. Rather, we forgive and then feel something better afterward.

Forgiveness isn’t really a thought either because logically we may be completely correct in our anger; the wrong done to us may be clearly unjust.  Yet the very definition of forgiveness has within it the recognition that the forgiver has every right to hold something against the other and yet does not do so.

Forgiveness is an action. Some might call it an act of will or a choice, but I believe forgiveness is an act of faith and it is both brave and hopeful. Within every act of forgiveness there is a portion of grief. It may be very small but it is there because forgiving is also giving up an idea or vision of what we thought it was going to be. If I forgive my friend for forgetting my birthday, a relatively small thing in the grand scheme of life, even there I am giving up some idea or vision of what I thought my birthday was going to be like or an expectation I had of my friend. Forgiving my friend is brave and hopeful because I am daring to believe there is a new future possible with me and my friend or, if not, there are future opportunities for happy birthdays for me. This is a small example, but the same is true on a larger scale and with more intense situations.

Forgiveness is not the automatic suspension of all consequences. Sometimes it can be but it is not always. Like my friend who forgot my birthday, forgiveness might look like everything returns to the way it was. Or it might look like a different kind of friendship between us even though I have laid down my hurt and angry feelings towards her. Forgive does not have to equal forget.

Forgiveness is one of the most powerful things we can do. The ability to hold something over someone because you believe yourself to have been wronged is nothing compared to the choice to not hold it over them. Nelson Mandela, who had every reason to hate the enemies who imprisoned him and so many others, when he came into the power and position that would give him the ability to exact revenge upon those in the apartheid government, he chose mercy and love instead. He called forgiveness a powerful weapon because it “liberates the soul” and “it removes fear.”

When we hold on to our pain, anger, fear, resentment, or whatever else it is that keeps us from forgiving, we are weighted down by these same things. Most of the time, all of the anger and resentment we hold towards someone who has wronged us does not hurt them, it hurts us. This is true even with little things. Imagine that ever person you could forgive but have not, every incident or event, is like a small stone. We carry these stones around, 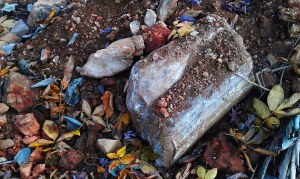 not those we will not forgive, and our burden weighs us down, diminishes our life, and makes us unhealthy and weak. Even if we believe that someone else has given us these stones because of how they have hurt us, we still have the choice to put them down.

What stones are you carrying around in your pockets? What gravelly little rocks rumble around in your heart? Do they not feel heavy? Do they not weigh down your joyful heart and take up space where better things could live? You can set them down if you wish.

Over the rest of our Lenten journey, we will continue to explore together what it means to forgive, why God calls us to forgive, why it is an act of faith, and how to forgive. Between now and next Wednesday, I invite us to think about those stones we are carrying around. Let us lift them up to God and ask God to help us learn to forgive as God has forgiven us.